Sometimes, innovative technology isn’t required to get the job done. Sometimes it simply requires the amateur “talent of a thoroughbred”, who has a heart of gold and a heart of service. And in Lancaster, PA. we had just that! Police were assisted in the arrest of a suspect who was stealing from a Pennsylvania farmer’s market, according to CBS News. Police say the suspect pretended to be an employee before stealing an undisclosed amount of cash from a stand inside Central Market on February 6th.

Luckily for the market shop owners, the raw talents of a witness saved the day.

A witness provided a simple black-and-white drawing to officers, and police say while the drawing was cartoonish it helped remind an investigator of a potential suspect.

In a Facebook post, Lancaster police conceded the sketch was “cartoonish” but it helped identify the suspect, Hung Phuoc Nguyen.

“While the sketch provided by the witness may have appeared amateurish and cartoonish, it, along with the distinctive physical descriptors, jogged the memory of at least one investigator to provide a potential suspect name,” the post read.

Below is the actual photo that led to his arrest.

Yes. A cartoon that looks like Waldo meets Jughead led to the arrest of this despicable thief. Amazing! 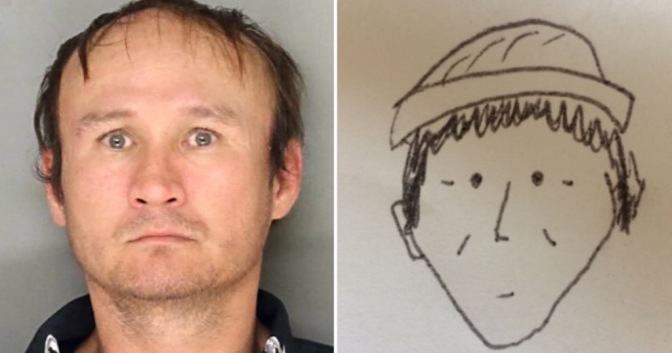