Wife Beater, Street demolition derby driver and former Florida Representative, Alan Grayson was given a new gig. Politifact, the “non partisan” website used to impugn news that doesn’t support Progressives viewpoints, were seeking new voices and views by hiring a Democrat and a Republican. The choice of Democrat was Alan Grayson. Here’s a clip of one of Alan Grayson’s Classic hits!

Here is former Congressman @AlanGrayson threatening to have Politico's @IsaacDovere arrested… @PolitiFact has just announced that they're bringing Grayson on to "serve as reader advocate for PolitiFact…critiquing our work and publishing on https://t.co/8q55Id18Vr"

So, this was the choice for political fact checking. That would’ve worked out swimmingly.

Here is part of their pitch. 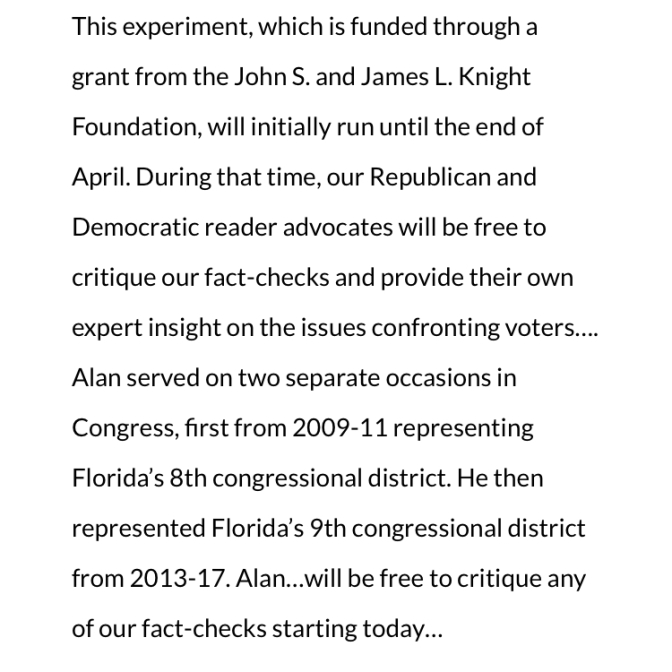 is this a joke? Alan Grayson harassed my colleague @IsaacDovere after i wrote a story with @BresPolitico and @MarcACaputo about allegations of domestic abuse. https://t.co/RkipNxtQgB

Yes, it's absurd that PolitiFact is giving Alan Grayson a perch. But also, he's already technically a candidate for office! pic.twitter.com/pdGF7IXIhV

But, Politifact giveth and politifact taketh away…as it was only 2 hours later when they posted that Alan Grayson would no longer be employed by Politifact. Wow. That was quick!

We sought out a Democrat and Republican to critique our work in order to try to improve the trust and credibility in fact-checking and PolitiFact. It has become clear our choice of Alan Grayson did not meet that threshold to many. pic.twitter.com/uJuoHhiObI

We called Alan a short while ago and informed him that we would be canceling our agreement for him to write on PolitiFact. We remain committed to this experiment, however, and will be seeking out a Democrat to replace Alan. If you have a good suggestion, please reach out.

So wait. @PolitiFact is a media fact-checking organization and you botched this decision so badly? This speaks LOUDLY about the quality of your analysis. And not in a positive way. https://t.co/efb9r3WlUL