In the midst of tragedy, America tends to come together to meet each other’s needs and provide a helping hand. Some are neighbors, who will utilize whatever resources they may have to help those who are in need. In Houston, some are using their boats to help rescue others who have no means to escape the hell in which they are enduring. Some are individuals who will travel to the affected area and provide any help they can physically provide. Many don’t have the ability to provide that type of selfless sacrifice, of traveling and helping in person. Typically, those unable to help in person, will donate to a Charitable Organization. Whether it be donations of scarce items and necessities, or financial help to an organization that can act on their behalf, there are ways to provide help without physically attending in person. Whatever the case, America usually unites to help each other in a time of need, regardless of race, color, gender, or creed.

An interesting phenomena has occurred during this particular tragedy that is unfolding in Houston and across Texas due to Hurricane Harvey. The “tolerant” and “Inclusive” Liberal Left has now decided to levy judgment upon those who didn’t vote for their candidate, by calling to ignore and deny charity. Whether they are deciding that it’s more important to donate to the Humane Society, because the actual humans in need “probably voted for President Trump”, or they are declaring that we should withhold simple prayers on the basis of how red the state was on election night, they’ve made a tragedy political.

And they’ve also shown they lack the compassion that they claim to be the stalwarts of, by turning their backs on those affected by the biggest natural disaster in decades. It truly shows the fraudulent and bankrupt hearts these hypocrites pretend not to own.

Charitable Humans, a Nonprofit Organization, decided to take to social media to let their position be known. Here’s what they posted: 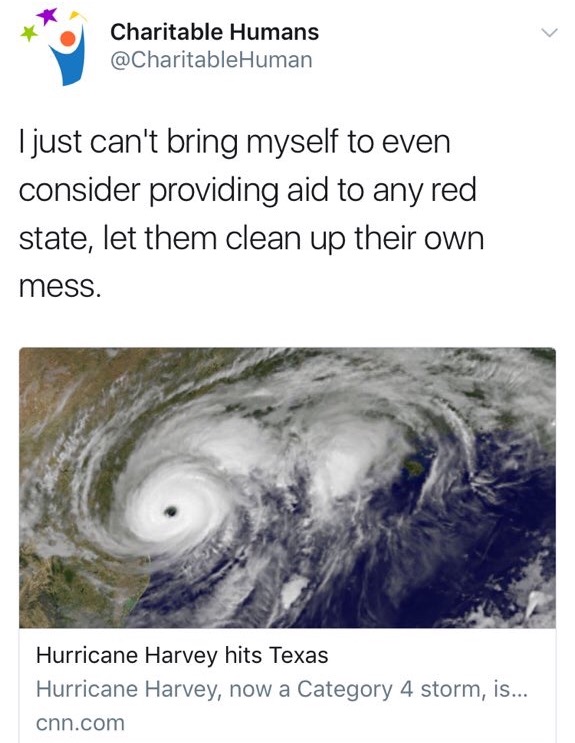 Seems to go against the Progressive Liberal mantra of “making a difference in the world”. They went further. 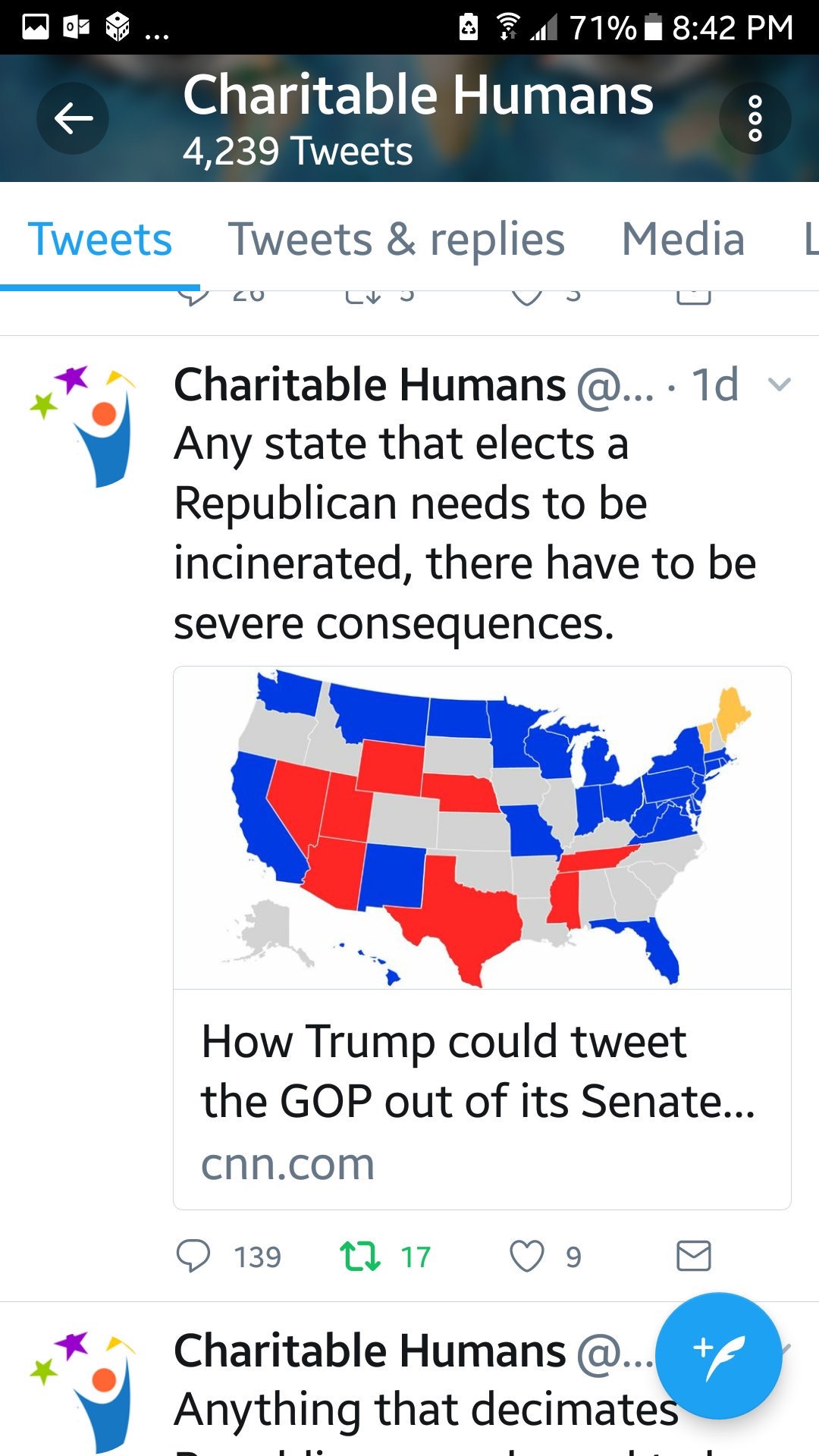 Seems pretty despicable to ignore helping your fellow neighbor in need, simply because of the decisions they made in a private ballot box. Your right to cast your vote for your interests should be solely based upon your decisions. You shouldn’t be publicly excoriated by Nonprofit Organizations who are calling to abandon you because of that decision. That’s the hypocracy of the Left. If their evil hearts aren’t illuminated for all to see at this point, then you won’t be able to discern the thief from the Samaritan.

Some have speculated whether this organization is even a legitimate entity. One search through public Nonprofit filings verifies that they are entirely real. That is the downside of the Leftist’s new method of activism: funneling your agenda through a Nonprofit shell organization. Yes, you get the tax exemption that you castigate others for trying to utilize in order to avoid paying. Yes, you get to enjoy the government grants that allow an unsustainable and unprofitable business model to artificially exist. But the downside is that your information is to be made public, by law. You can find all of the information that you need to validate your interaction with any of these Nonprofit organizations.

So, here are the details of Charitable Humans Organization.

Charitable Humans values diversity and the idea that people matter, and by working together, change is achievable. Regardless of cultural backgrounds, race or beliefs, all human beings want the same things; peace, equality and the freedom to own their identities without judgment or persecution.

Charitable Humans’ primary focus is to raise awareness encompassed in our core issues & causes and endeavoring to increase individual participation in furtherance of our mission. These goals are pursued through a network of citizen journalists submitting content that is peer-reviewed. Since many of the causes we are dedicated to are also ones that are shared internationally, coverage of international news will frequently be published, and we do not limit participation as a citizen journalist to U.S. citizens only.

One must take a moment, before you make that donation, and examine the organization. How much of your donation goes to the cause? How much goes to Administrative costs? Are they actually an organization that will even help?

Our favorite ambulance chasing Islamic extremist, Linda Sarsour, is an excellent example of this.

It’s pretty disgusting to pad your political pockets on the backs of a natural disaster. But, past history with Sarsour shows that is typical fare, as she raised money for a Jewish Cemetery which they have yet to receive.

Maybe you can segregate your money, so white privilege isn’t rewarded above minorities or so-called disenfranchised ethnicity.

It’s truly sickening to witness heartlessness and political aggrandizing in real time. You begin to lose a bit of faith in humanity.

Please take it upon yourself to do your research before you donate. Be sure that you’re not simply paying for the salaries of the office employees and those at the head of the organization. Be sure that your dollar is utilized to it’s fullest. And leave the politics out of your decision to be a decent human being.

Please donate for additional exclusive content. Thank you for the support.