With another edition of a Free Speech Rally on September 14, 2017, we can be sure to expect disruption. And with that, it’s time for another “Battle at Berkeley”. The college campus has been a place that is a battleground for many issues concerning free speech. Given that the progressive indoctrination is most rampant on college campuses, the ideological “fight” needs to be held there. The way to win the youth back to the tenants of individual liberty and small government needs to be juxtaposed with progressive Marxism in order to illustrate its ridiculousness. And some of the best and most intellectually armed soldiers are marching in, to ruffle the feathers of the fragile snowbirds hiding in their safe spaces.

Ben Shapiro of the Daily Wire has set up a Free Speech Rally at the University of Berkeley on September 14. He has made sure to do this legally, even to the point of covering UC Berkeley’s “security fee” requirement of $15,000. That’s your tax money at work. You’ll need to pay for additional security because the police can’t be counted on for maintaining law and order. This, effectively bolster’s our case for the necessity of the second amendment. But that’s another story. But, Shapiro seems to have caused a run on tickets to the event, selling out in record time.

Tickets for my speech at Berkeley sold out in the first 45 minutes. That's why @UCBerkeley should release the other 1,000 tickets now.

What should we be aware of when this event occurs? Well, we can expect the Antifa Hit Squad to arrive, bused in with homemade shields and pipes. We can expect to see the ISIS Style uniformed “Black Bloc” swinging at anyone wearing a Red MAGA trucker hat. We can also expect to have the largest collective hissy fit, temper tantrum on record. And somehow, with the coercion of the media, they will paint the broadest brush of those attending and frame them all as “White Supremacists.” They will use this marketing branding of the attendees as a way to vilify them all in the press and give justification for their vigilante violence. And the fliers are already littering the campus. 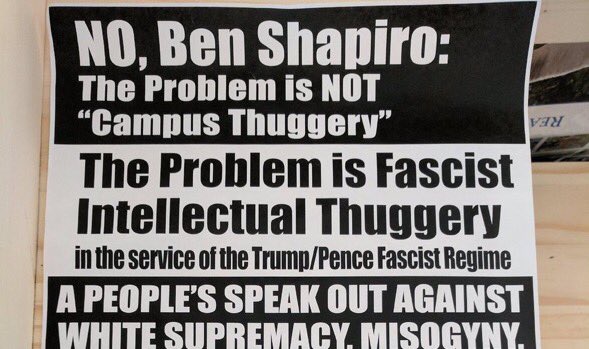 And they have begun offering counseling services for those offended by Sharpiro’s Speech.

When speech that doesn’t agree with your disposition causes you to seek counseling, you have a bigger issue at hand. If your fragility is affected by the words of someone else who is without malice, and results in your collapse, you’ve got larger confidence issues. Realize we never went to this level of berserk over two simultaneous elections of a full blown Marxist named Obama. We can handle speech that isn’t coddling and in comfortable agreement.